Home » Politics and society » Which is the GAL-iest country in Europe? 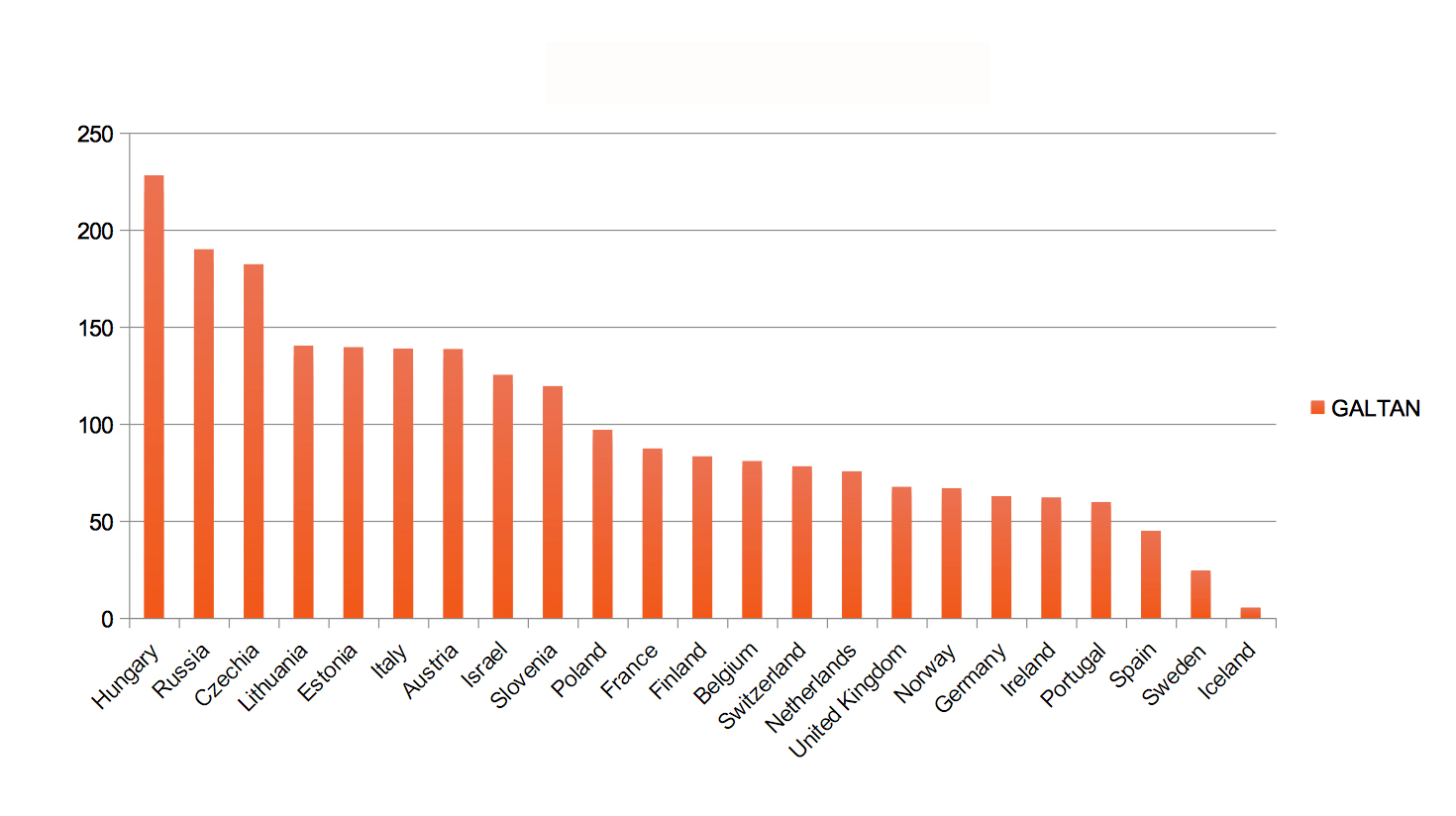 We have in previous articles concluded that data does not support the notion that Europe is not undergoing a right wing nationalist wave as some claim. In truth, values are moving slowly toward the more liberal end. So why are we daily being fed the opposite notion? There is reason to suspect medial dramaturgy where GAL is good and TAN is evil. A Game of Thrones of values and politics.

My question is: What does it look like if we look at separate countries? Are there underlying causes for a certain level of GALTAN? And YES, there are absolutely differences between more nationalistic (TAN) and more liberal countries (GAL). The average on the GALTAN-scale is 100. Countries beneath 100 are more GAL while those above 100 are more TAN. Why do these differences exist?? Good or bad? Does man somehow require some way of experiencing the struggle between good and evil to feel some sense of meaning with their life?

There are structural drives behind a higher level of TAN. Our analyses point out the obvious – that there is a correlation between conditions that harm the possibility of leading a meaningful life. In a country with high corruption only those that are part of the club get to develop. If you’re out of work for a lengthy period of time you will easily lose your self-esteem. Facing discrimination because you’re a woman also diminishes your chances of living a meaningful life. Finally it’s important to have good health, something health care with proper resources can provide. Basically it comes down to meaning. Does this mean that TAN is more meaningless than GAL? No it means that the people who score higher on TAN often feel that they have been denied or risk being denied a meaningful life. It is not about good and evil.

Iceland and Sweden are the most GAL while Hungary and Russia are the most nationalist countries. Poland and France are approximately in the middle of the scale. Perhaps not entirely surprising. Sweden is one of the most extreme countries regardless of what values or societal analyses are performed. We see that on an individual level there is a strong positive correlation between socio economic factors and TAN. This has been thoroughly investigated and need not be discussed further. The most important question today is: How will this impact the on-going Eurovision Song Contest?

Let’s compare the extremes of the scale; Hungary -> Iceland and Russia -> Sweden. Hungary was represented by Az én apám (My father) performed by József Pápai, a Nano-esque composition both in sound and expression. The lyrics are nostalgic and about the artist’s childhood. Elements of folk music. Iceland’s song on the other hand is unabashedly critical of society, delivered in a dystopic techno-format. The lyrics discussing the spread of hate in the world. The aim of this Icelandic performance at Eurovision is, among other things, to actively promote the fall of capitalism. Neither Iceland nor Hungary display any great originality and quite clearly illustrate the dimensions of GALTAN, whether you find this novel or not. Neither of the representatives have any chance of winning with their, in my mind, rather meaningless programmatic and political agenda.

In the second comparison of extremities, Russia – Sweden, we are treated to two clear possibilities of winning the contest. Both John Lundvik, as well as Sergey Lazarev has been predicted to win, with music that is about love. Swede Lundvik maybe in a more heartfelt way than Russian Lazarov. It’s difficult to find any musical expressions that can be directly linked to GALTAN. Apart from the obvious.

Who will be the winner? We will all know shortly.