Home » The Editor » East against West

Just under three years ago I wrote an article about Swedish values. Values typical of Sweden and which seem defining for a Swedish person. In this updated article I have compared Swedish values with those of Russia. Are there similarities? Differences? Strictly geographically we are not that far apart. But we know that geographical and cultural distance do not always mean something[1].

It is modern to talk about values today. Not least when explaining what makes us Swedes so great. Openness and equality are often mentioned as examples. I think that our Swedish values are both our good fortune and our curse and the time has come to be less self-righteous. We may in some regard have values that are exceptional for a good stable society. Still there are parts to the Swedish identity that are less flattering and prevent us from being the role model many wish us to be. I feel that the discussion in the media has two basic flaws:

Values are, interpreted freely from sociological research, the basic socio-cultural drives that help us make important decisions. They are linked to what we think about different occurrences and comprise our social DNA. This DNA is developed during our formative years and changes very little once we have reached adult age. Values, for example, differ from attitudes that are more local and fleeting. You can, for example, have a certain attitude toward Dua Lipa or Kjell Lönnå, while you are unlikely to have a special Lipa/Lönnå-value that colours your perception of these, in their own fields, successful artists. Values are very persistent and affect your entire life without changing very much from your early teen years and onwards. An example: when a politician, for example, Elin Söderberg in an article[2], calls for a change in values with regard to wind power she actually means attitudes. If she truly meant values in this case she will have to wait for generations before the desired values change will happen.

Our values/DNA have great importance both on micro-level/individual-level as well as on macro-level/societal-level, for example Sweden´s innovative ability is in part based on our uniquely individualistic values. I could carry on at length about the research available on values and their long-term consequences for societal development. I could also tell you how values have evolved during the past five centuries as I performed an extensive and very rewarding study on the subject a few years ago. But as I am a nerd and prone to tiring others out with what I regard to be exciting theories I might as well press on with the matter at hand: Are there truly Swedish values, and if so, what the heck are they?

Below I list five points about Swedish values. The points are ranked from 1-5 where number 5 is the one value that most defines us as Swedes. These claims are based on more than 400 000 interviews in 50 countries the world over performed between 2002-2020.

Swedes are in a way bipolar in their values. There are in essence many good liberal values in Swedish society, but there is also a dark underbelly that we don’t care to acknowledge or worse yet affirm its existence.

On the one hand we want to treat all people the same. On the other we don’t want to be influenced..

On the one hand we are individualists. On the other it is considered ugly to succeed.

Between the light and the darkness lies a difficult antagonism. A double standard and a strong but vehemently denied hubris. Can this explain some of the sharp shifts in Swedish politics, from one side to the other, that we are experiencing right now with regards to joining NATO for example. Brought on by Russia’s attack on Ukraine.

On the whole values have barely changed during the past two years in Sweden. We are almost as individualistic and caring as before. This is normal. Values are not normally supposed to change rapidly. But there is a large and very surprising exception. Sense of security falls and the need for safety increases significantly. Remember, this is before the most recent Russian invasion of Ukraine in 2022. These are likely values that have been affected by the shootings of recent years, the associated criminality and the global pandemic. Our foundation has been disturbed.

It is also among the youngest in our surveys that this shift in values is seen. Our 15-20-year olds are significantly less secure than the same age group two years ago. As discussed we also see a significant decline in individuality as a result. We are also seeing the emergence of a more cautious generation. A generation who will rather play it safe than take risks. And not only that, it seems that Jante will become more dominating, a direct threat to Sweden as a country of innovation. With repercussions that we will not fully notice until in 10 – 20 years. 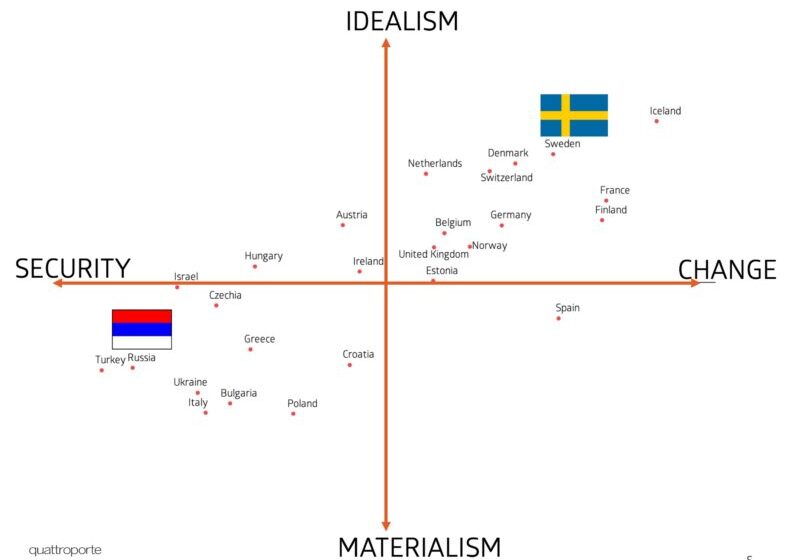 Consequences for Sweden of the future

Our typical Swedish values make Sweden a  strong country in the start-up economy. Many entrepreneurs want to be independent and strive for their own vision. The adverse is the point where companies are becoming large and, in our country, there is an imminent risk of envy which often ends with the growing company relocating to a market where being the biggest and the best is ok. A country without Jante.

Another discussion is about what happens when our sense of security falls. Like now. The relationship between idealism and security is strong, as is the will to go one’s own way. If values of security weaken the will to forge one’s own path will diminish.

A third thought concerns the one-eyedness of the elite that needs to be broken, that we can only handle one idea. One idea that becomes the stablished truth with media, politicians and institutions. This behavior must be broken as all democratic societies need, and must be able to have, a sensible debate on ideas.

I think that when we talk about values in our everyday life we mean an image that we have of ourselves. A dream image that is to a greater or lesser extent false. It is a little like singing in the shower, it sounds good amplified by the ceramic tiles, but when push comes to shove most of us are not really ready for opening night at La Scala or even Avicii Arena.

And now on to the Russians

Russia is values wise the opposite of Sweden. We can begin with what we identified as the most Swedish, super-individuality. Russia is not an individualistic country, quite the contrary, independently forging your own path in your life is not natural for the average Russian, as such he/she is the polar opposite of the average Swede. While Russia’s low individuality is more reminiscent of a non-European, religiously fundamental country, Sweden is among the most individualistic in the world. This holds true even in 2020, even if the youths alter the picture slightly.

Russia are not neighbors, not culturally or with regards to values. No matter how strongly we desire to claim to be close to Dostojevskij, Bulgakov, Tjajkovskij, Stravinskij, Kandinskij and others in the vast cultural treasure of Russia. Surely, we resemble them a little? In short, the answer is No, we do not. For better or worse. We may lack the artistic depth and hyper sensitivity that is required to produce a Brothers Karamazov.

We know from longitudinal studies that a totalitarian leadership cements the values present in a country. They stop developing and Vladimir Putin seems to understand this and works to stifle any change before it can happen. Because it was present in Russia too. In citizens that are now between 25 and 35 years old.

Keeping a low profile is also important so as to not risk your safety. Safety values are very strong with the Russian people. To feel safety and trust, like Swedes, is alien to many. This may be the sounding board that explains Putin’s great fear of being surrounded by NATO and the western world. To the average Russian Swedes are viewed as frivolous, liberal and self-absorbed, perhaps even decadent as the ruling Russian elite are wont to describe us.

Swedes have for generations been taught to trust in society and stop looking over our shoulders to avoid the next disaster. This security has made us focus on our own life projects and has perhaps left us a little naïve. Maybe we relax a bit too much at times? Francesco Morace, a sociology professor in Naples described the difference between southern Italy and the north of Europe with a simple metaphor. In Naples a green or red traffic light is merely a suggestion, which means that southern Italians always have to stay alert. In northern Europe the populace has long since lost this alertness and survival instinct. In Russia it is still around. 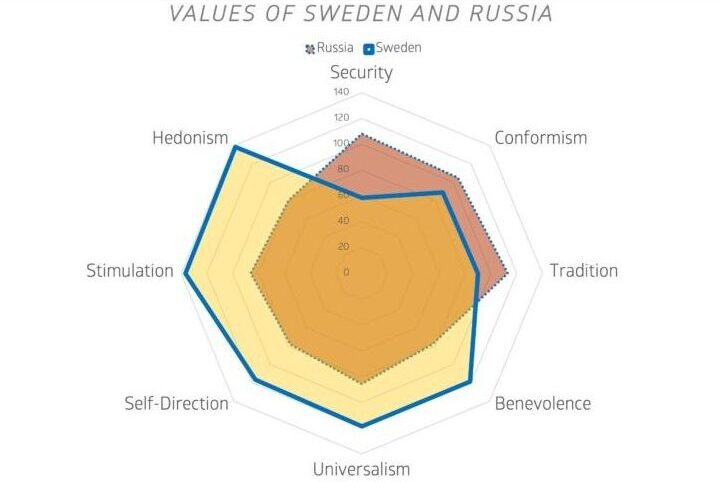 The western world is surprised and disgusted by how Putin’s Russia is invading Ukraine. In reality it is us who are exhibiting ignorance and naivety in our relationship with and expectations on the Russian bear. Russia is the least modern nation in Europe and have values that Sweden and the rest of Europe have not had in over 70 years. Maria Snegovaya, a Russian researcher of social studies at Columbia University, is on the same track as me, when she purports that Putin works to protect a Russian-orthodox culture that in our secularized western world view can appear quite alien. Simply stated I am saying that Russia today are living in the late nineteen forties, while Sweden and other countries are living in the 2020-ies and this applies to intellectuals, politicians and ordinary people alike. None of this, of course, excuses Putin’s and Russia’s actions but it does present a reasonable explanation to an inconceivably cruel and irrational behavior.

1) A great deal of the Swedish self-image is extremely beautified and twisted.

2) The discussion of values is often ignorant and is really about something completely different.