Shootings and gangster related deaths are spreading like a pandemic in our at risk areas. Nobody quite knows why, or how we should stop the killing. Poverty and exclusion are presented as possible explanations. What if it is not about social factors but something else entirely. Something more pervasive that is the cause of these tragedies.

Politicians fumble and blame each other. Criminologists gather data and search for causal explanation models with increasing frustration. Nobody seems to be able to provide a reasonable explanation to this development, and those living in these areas are left huddling in uncertainty and fear of being the next victim. How can this happen in a free, developed nation like Sweden?

In the gangster drama Snabba Cash we meet the two protagonists Salim and Leya. We are presented with the image of two ambitious people who want to get ahead, no matter what. They don’t appear to be evil, quite the contrary. Rather we see two dynamic, intelligent, feeling but aspiring people. The price for their drive is high, both for themselves and their surroundings. The drive and the hunger that is supposed to bring Salim and Leya happiness comes at a cost…of…lives.

The Clash of Civilizations…

In the controversial book The Clash of Civilizations  Samuel P. Huntington meant that the world after the cold war would be characterised by conflicts based on religious differences. His vision has received harsh criticism for its ethno-centricity and lack of empirical evidence. With a few decades under its belt Huntington’s book proves to be better than its reputation. In an analysis of religious values in Europe that I performed a year or so ago, it was easily shown that there are very big differences between, for example, protestants and Muslims. 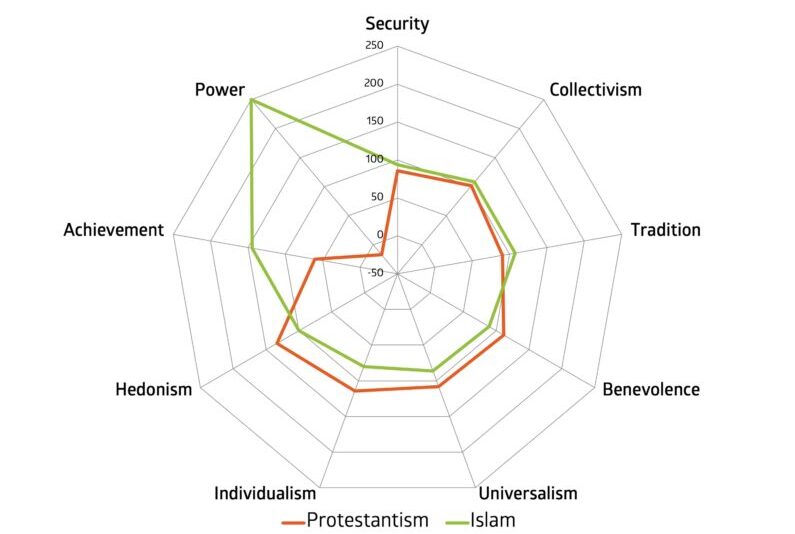 …or conflicts of values?

Differences that seemed to persist even if individuals moved to a new culture and even if they were not particularly ardent religious believers. In the analysis education and income were controlled. All respondents were born in country. Protestants contrasted harshly in their aversion to power values compared to Muslims. The will to dominate and perform is strong among Muslims compared to Protestants. This is not necessarily right or wrong, but may lead to conflicts of values and differing expectations on life.

Religious values will impact society and politics sooner or later, as well as people’s norms. Is it coincidental that countries with Muslim values have stronger nationalism and more authoritarian states. Could one venture so far as to claim that Sverigedemokraterna basically are an expression of just these values? That is, part of a shift in values that comes from a will to dominate and have authoritarian rule?

There are no quick fixes

If religion is part of the explanation to the developments we are seeing in the suburbs of Sweden what can we do about it? There are no quick fixes. Changing values takes a long time. It takes generations. But without increased dialogue and understanding between groups with different religious background the killings in the suburbs will remain a difficult problem to solve. Many of us will be forced to be a little less eager to express our Protestant values and Muslims must become a bit more “Christian”. Perhaps this sounds like an impossibility – but we have no choice if we wish to co-exist.  Pew Institute estimates that Sweden will have a population that is 33 per cent Muslim around the year 2040.

In the 19-page story the grand inquisitor by Fjodor Dostojevskij Jesus returns to 16th century Seville. In one of the strangest appeals in history Christ is jailed by the grand inquisitor and threatened with burning at the stake. In the end, however, Jesus is set free. Many view this as the ultimate example of the idea that freedom must prevail over dogma. Maybe this is the only way we can reclaim the security so many of us long for?