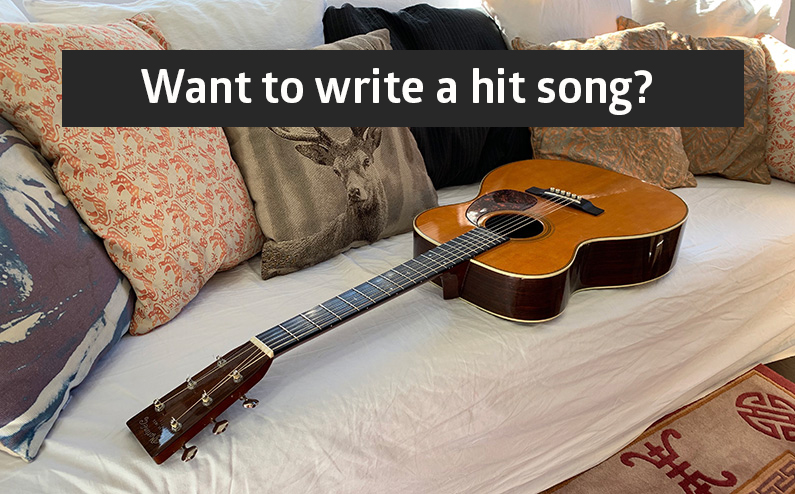 I’ll tell you how to do it. But first some basic music theory. Songs are analysed using the function that the chords/harmonies have within the key. Example: If a song is in the key of C-major this comprises the notes C, D, E, F, G, A and H in the scale. Every note in the scale can be linked to a chord. In C-major this translates to C=I, Dm=II, Em=iii, F=IV, G7=V, Am=vi and Hm7–5=vii1. Seven chords (I-vii) to choose from. Regardless of key. Naturally it is possible to choose a harmony that is not part of the key, with the consequence that interesting and elegant asides are created, these could be likened to subordinate clauses. Unfortunately deviations like this are rarely done in the hit music of today, while it was more common in the past. Could this be because it requires a sensitive ear to produce these beautiful subordinate clauses? Today 90 per cent of all songs use the same progression of chords.

What are the chords?

The chords are I, IV, V and vi. For a song in C-major this becomes: C, F, G7 and Am. Try it. You can mix them any way you want, but I have a hot tip: vi, IV, V, I is a hit every time. It will sound good, familiar and clean. Add a melody (Despacito will work nicely). Then try varying the melody slightly and voilà, you may have created the next megahit.

Does all music sound the same today? Was popular music better in the old days? The above-mentioned progression of chords was unusual in the old days. Rick Beato showed that of the 27 number one songs of the Beatles only one made use of these chords, namely Let it be. But there are also current composers who refuse to use this concept. Of the 22 number one songs of Max Martin only two use this recipe.

Why this development in the hit lists? Are songwriters less competent nowadays? Do they have the imagination and ear of infants? No, it’s all down to the commercial terms that govern the music industry today. Those who decide what songs are released will only release songs that are made using this recipe. Only mega composers like Max Martin are allowed to do what they want.

So, they next time you hear a hit song and feel like you’ve heard it before, you’re absolutely right. You’ve heard the same recipe hundreds of times with a few small variations. Now grab your guitar, open the lid on your piano or fire up your garage band. Good luck with your composing and make sure you write a hit!

1 Harmonies in minor are usually written in lower case ex. am. For pedagogic reasons I am using upper case in this text =Am.