Home » Politics and society » Can the Céline Dion effect save Donald Trump?

Can the Céline Dion effect save Donald Trump?

Céline Dion is one of the world’s most successful artists of all time, with more than 175 million records sold and 15 years of packed houses in Las Vegas. At the same time, she is hated by the majority of credible music- and cultural connoisseurs and appears, among them, as a disgusting example of tastelessness, emptiness and raw commercialism.

All opinion polls and assessors seem to agree on, in essence, that Biden is the winner and Trump stands as the loser. Everything seems to go Biden’s the Democrats’ way. But what if the worst scenario possible, according to the general perception in Sweden, still happens and Trump is the winner again? Maybe it is not that mind-blowing after all. Maybe it is even quite likely? The renowned American statistician guru Nate Silver estimated that there was a 71.4 percent chance that Hillary Clinton would win in 2016. Since then, the research institutes worked hard to improve their methods and this 2020 election it is estimated an 88 percent chance that Biden will win. Times out for Trump or is it?

Are you a victim of the Céline Dion effect?

Social norms sometimes lead voters to indicate what candidate they consider more acceptable in surveys. This behavior is part of the explanation why opinion polls missed out so badly in the 2016 presidential election and thus underestimated President Trump’s strength. This is just like a minority with so called high social- and cultural capital do not want to admit listening to Céline Dion, voters do not want to admit such bad taste as to prefer a soap opera star and quirky property developer to a professional politician. Not even in an anonymous poll. We may call this hypocricy the Céline Dion effect. It can be assumed that this effect has increased over the last four years rather than decreased *. Maybe you are a victim of this yourself, secretly enjoying Céline Dion’s music and/or Donald Trump’s tweets.

I do not intend to do a meta-analysis of Biden’s and Trump’s campaigns, there has already been too much said on this subject. Some wiser and some less talented analyzes have been presented. However, there is a few things to be said about Trump’s communication strategy. Trump’s own media outdoes old media as he has a direct link to large sections of the people. As everyone who has worked with political opinion formation knows, it is important to strengthen the small talkers, those who speak politics in the workplace, at parties, when they meet the congregation in connection with church visits and other everyday gatherings. On these occasions, Trump has an opportunity to broadcast live and provide them with voice points. In his crude, sometimes crowd-pleasing, twitter way. Political correctness is getting a backlash and it probably feels good to have someone who talking straight forward, without muffling everything to become politically correct statements. This straightforwardness appeals to many people, people tired of all those arranged non-offending messages, too often without substance

Instead of conducting opinion polls, it may therefore be worthwhile to let the Machine and AI give it a try. Maybe the Machine is less sensitive to politically correct answers and the Céline Dion effect? 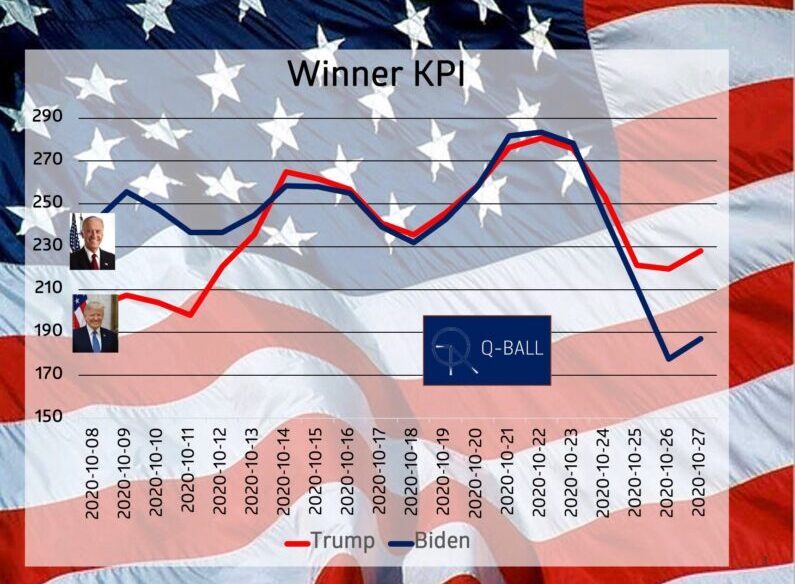 We use Q-Ball with more than 1.5 billion web pages to estimate who will win the American Presidential election. This is not only based on social media, but to a greater extent on other sources such as media, research, organizations and to some extent also social media. What we measure is the Winner measure, which has proven to be a good measure of sympathy. For example, we saw that Donald Trump passed Hillary Clinton days before the 2016 election as an effect of the email scandal.

What is possible to see in our analyzes?

Maybe you are one of those who hates Céline Dion and every time you hear the pan flute at the beginning of My Heart Will Go On you hit the off – button. Or maybe you are someone who secretly enjoys the song Pour que tu m’aimes encore but leaves the cover of Björk’s latest vinyl record strategically at the living room table. This phenomenon is exactly what Donald Trump must hope for. On November 4, we will know if the Céline Dion effect saved the incumbent president. What do you think.

I am a singer and I really think Céline Dion is an extremely skilled vocalist, but she does not touch my heart if she does not sing in French. Maybe I will give in to some of her work and risk almost as much hatred and embarrassment as Donald Trump himself…

BONUS: Here, Donald Trump sings My Heart Will Go On not completely without help. Starts 1:30 into the movie. I am a little impressed that he puts melism at the end.

*This relationship is reminiscent of what in election research is called the Bradley effect. The expression comes from the African – American Tom Bradley, mayor of Los Angeles 1973-1993, who had a major lead in opinion polls for the gubernatorial election in California in 1982, but which he still lost to the white candidate. It’s a bit like secretly liking Céline Dion. Very few people know about Tom Bradley, however, and besides, the relationship to Trump is not really analogous. Therefore, we use the term Céline Dion effect in this article.